skip to main | skip to sidebar

Beequeen played this night at local Irish pub called The Shamrock as part of the Sciencecafe event, people talking about depression. Not the best of equipment resulted in a so-so concert, but also in a recording that isn't much worth. Very soft, but if you normalize it it's all distorted. So nothing here to download. A pity since we played Oliver Lover for the first time live. New song!
Gepost door Kapotte Muziek op 14:49 Geen opmerkingen: 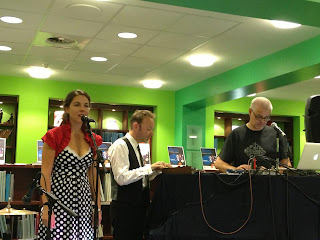 In quite an unlikely surrounding we played the local library of Nijmegen, perfect opportunity to test two new songs from our next CD 'Around Midnight' and some classic tunes. Picture by Hans van Wijk - Thanks.
I know many of the links below are dead, send me an e-mail if you want any of this.

And then we came to the final concert of our short tour. How time flies! The second show in Moscow (as Beequeen with Olga singing) was quite an experience: neither the audience nor we were quite sure what to expect. We played third on a bill with 3 other bands, none of which sounded anything like Beequeen. But like magic, the audience became more and more enthusiastic with each song – as did we. The playing was smooth and good, the singing went great. A couple started dancing in the isle. People clapped along and laughed at our tiny jokes. The show ended before we all wanted it to end. To me the Dom concert was probably the most fun one to do. We made friends for life that evening and sold quite a few CD’s.After the show, we went out to celebrate with cocktails and were almost refused entrance at a posh cocktail bar. If the bouncer had known we were Beequeen, he would have offered us Mick Jagger’s seat. A great end to a great evening and tour. (FK)

We left St Petersburg in high spirits and relocated to Yaroslavl, some 300+ kilometers up north from Moscow. Originally scheduled to play at Dom Muz, we were diverted to what I can only describe as Artist Residence as it had no official name. The rescheduling was necessary because there was no electricity at Dom Muz. Beequeen unplugged – a nice thought! With Olga staying a day longer in St Petersburg, the show in Yaroslavl featured me on vocals. As a nice addition, and since we were the only band playing, we decided to do our own support act: as Wander we played a condensed version of our set (20 minutes), a short break and then we magically re-emerged as Beequeen for the second half of the show. Since I had to sing all the songs as well as play guitar (this time a six stringed one) and remember all the breaks in the songs, this was an evening I anticipated with some nerves, but it all worked wonderfully; both the Wander as the Beequeen set went really well. The concert was filmed with professional cameras. As a result, the full Wander show and the “after party” can both be found on YouTube. The after party in fact consisted of delicious home-made food and alcohol. With one in each hand we enjoyed the gorgeous night view of Yaroslavl from the 14th floor where the venue was based. (FK)
Line recording.
download this concert
Gepost door Kapotte Muziek op 03:00 Geen opmerkingen: 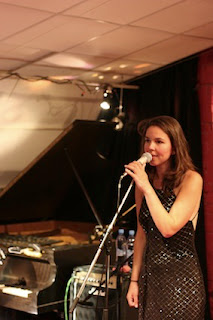 The second concert of the tour in St Petersburg and the first one as Beequeen with Olga on vocals. GES is a gorgeous club, hidden from its street entrance. You have to cross a few squares, walk up a few steps and then; lo and behold: there is a bar, a Beatle museum and some very friendly people. The supporting act Badoseneticcube featured a girl with a lovely voice singing traditional Russian songs stretched out into long soundscapes. The club had a grand piano on stage, which we used to great, if not exactly loud effect, on The Lord Is My Shepherd. Olga turned a few heads in her golden lamé dress. The concert went really well, probably the best one as the Beequeen threesome so far. All those rehearsals did paid off. The response from the audience was great; we sold CD’s and even had to sign a few of them. A really lovely evening! (FK) 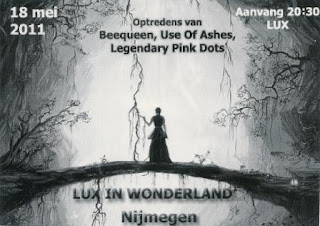 Great recording, great concert, great evening. Excellent concerts by all involved. Almost like being in a wonderland. (FdW) 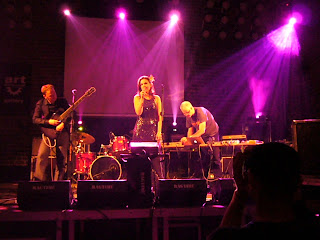 We played rather early evening, following a harsh set by Theme, and an even louder DJ. The sweet songs we did fell in good earth for the early onlookers. We played a new song and some classics. Made some mistakes and had fun. (FdW)

The recording is a curious mixture of microphones and P.A. and sounds rather 'thin'. Don't know why. 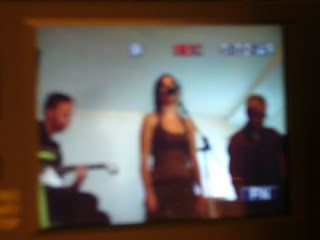 Local TV will do a feature on me, and there will be various filmed bits by Kapotte Muziek. Not to scare the man in the street away, Beequeen taped three songs in the Geluidwerkplaats Extrapool in front of two camera's. Full item on youtube soon. These songs are 'Breathe', 'Fine Day' and 'The Honeythief'. Three sets were done but this version here will be used for the programm. (FdW)

Dear Visitor,
Welcome to the live archive of Beequeen! This archive features every concert registration we actually have the recordings of. All live shows have been transferred from their original format (ranging from cassettes to hard disc) without any enhancement or treatment to high quality MP3s. These things are as they are. All live files are available for free download. Feel free to share, but please do not release any of this in any commercial way. Please report broken links via e-mail to frans@beequeen.nl, and NOT via comments.

Don't forget to have a look at our website

Buy your records at Korm Plastics

And fetch your Vital musicpaper Weekly